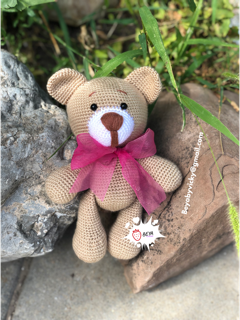 (Ms. Vicky Chavez-Fino crocheted this teddy bear during her time in Sanctuary at First Unitarian Church of Salt Lake City. Crochet-art has become her main method of coping with extra time on her hands during sanctuary.)

UPDATE: As of October 23, 2019, ICE has withdrawn the notice of intent to fine for Ms. Vicky–and also for six other women living in “sanctuary” throughout the country.  The reason provided in each case, as stated by ICE, was: “following consideration of matters you forwarded for ICE review, and in the exercise of discretion under applicable regulations, ICE hereby withdraws the Notice of Intention to Fine.”  Triche Immigration Appeals would like to commend the work of all attorneys and advocates on the informal defense “team” spearheaded by Prof. Barbara Hines, Mr. David Bennion and Mr. Dan Kesselbrenner.  The original post appears below.

This week, a number of individual attorneys, non-profit and grass roots organizations have attempted to defend asylum-seekers and other immigrants living in “sanctuary” against ICE’s recent assessment of civil fines approaching 1/2 million dollars.

Around July 1 of this year, several immigrants in sanctuary, including our client, Ms. Vicky Chavez-Fino, received letters from ICE issuing preliminary “civil penalty” fines for failure to depart the United States.  Ms. Vicky’s fine is approximately $470,000; another fine, issued to Ms. Edith Espinal Moreno, is $497, 777.  Some of those fined, including Ms. Vicky, have legitimate asylum cases pending in US Courts of Appeal—but ICE nonetheless has ordered them to depart the country, refusing to grant a Stay of removal while the court appeals are pending.

Section 274D of the US Immigration and Nationality Act (“INA”) is called “Civil Penalties for Failure to Depart.” It provides “Any alien subject to a final order of removal who…willfully fails or refuses to depart” shall be fined $500 dollars per day—a number the Department of Justice has adjusted for inflation to $799.  ICE contends that the “sanctuary” appellees like Ms. Vicky are subject to this provision because they are willfully refusing to depart the United States.  However, Ms. Vicky disputes this provision applies to her; instead, she argues that, as a bona fide asylum seeker who legitimately fears for her life in Honduras, and who has a legal right to her Tenth Circuit Appeal, the law cannot cast her as “willfully” thwarting her removal order.

Dr. Triche filed Ms. Vicky’s defense brief with ICE this week in Washington, D.C.; several others filed their own defense briefs through their own individual attorneys.  Additionally, a team of volunteer attorneys and advocates, including Professor Barbara Hines, Dan Kesselbrenner, Professor Alina Das, and David Bennion, worked together to develop arguments to be included in the briefs.

According to the Washington Post, “Federal officials said they quietly began assessing the civil penalties in December as part of a rolling effort to curb sanctuary jurisdictions that have thwarted Trump’s efforts to deport undocumented immigrants and to hold immigrants accountable for breaking the law.”  Trump Administration Threatens Hefty Fines on Immigrants who Elude Deportation (Jul. 2, 2019) available at <https://tinyurl.com/yxpc3c3e>.

Noel Andersen, grassroots coordinator with Church World Service, estimates that there are 44 undocumented immigrants nationwide who have publicly announced they are taking refuge in U.S. religious congregations.  Sanctuary churches say ﬁnes against immigrants meant to sow fear (Jul. 5, 2019),  <https://pres-outlook.org/author/rns/>.  It is unclear how many immigrants have received ICE fine letters, and DHS claims to be unable to provide an accurate number.  However, many or all of those fined have spoken about their cases in the press, and feel that the fines are meant to be a punishment not merely for their failure to depart, but for the act of taking sanctuary.

Yesterday, Ian Head, Senior Legal Worker at New York’s Center for Constitutional Rights, filed a Freedom of Information Act request seeking to determine policies, procedures, and data regarding ICE’s use of penalty fines against all non-citizens, including, particularly, those in sanctuary.  The request was filed on behalf of CCR, Grassroots Leadership, Free Migration Project, and Austin Sanctuary Network.  A copy of the FOIA request can be found here: http://tricheimmigrationappeals.com/wp-content/uploads/2019/09/FOIA-Request-Sanctuary-Fines-Final-Version-Signed-1.pdf